Once a site had been chosen, we designed our home.

We started by determining the dimensions of our structure.  On the suggestion of English teacher and Assistant Principal Mr. Williams (the other one), we elected to use Thoreau's dimensions for his house at Walden pond for the house (10 x 15).  Thoreau was a poet, philosopher, naturalist, environmentalist, scientist, engineer, farmer-- he embodied the multidisciplinary project.  Thoreau's measurements of Walden pond and his climate data are used today to compare changes in the environment over the last hundred and fifty years http://www.nytimes.com/2008/10/28/science/earth/28wald.html?pagewanted=all .  His observations of animals in their natural habitat for long periods of time presaged the field study.  He was way ahead of his time.  Because all juniors read Walden they will be familiar with the structure and the ideas behind it, some of which include living more modestly, building something with your own two hands, living closer to and in harmony with nature, and ultimately leaving a smaller footprint. Using Thoreau's Walden seems like a natural fit.  Thoreau's name also has value and, associated with this already awesome project, may draw even more attention in the community as well as better engage students in English and Science at San Marin for years to come.

Below you can see two pictures from Thoreau's cabin at Walden Pond.
Thus, in order to allow English and science to be linked and to get juniors into the structure when they study Walden, we elected to make our structure as close to 10 feet by 15 feet as we could.  After sketching out floor plans, we settled on 10 feet by 14 feet 8 inches.

In order to maximize the sun's impact on the structure, we want as much sunlight as possible during the winter months and as little sunlight as possible during the summer months.  As a result, we designed our structure to have a set of windows on the South side of the building.  We're going to angle our building so that the long side is facing South which is where the sun is primarily located in the winter.  We'll have a total of 12 feet length by 4 feet height of windows on the South side allowing lots of sunlight to enter during the winter.

However, to minimize the effect of the sun in the summer, we designed a large overhang of 4 feet starting a foot above our bank of windows.  This will allow all of the sunlight to enter the house when the sun is at 26.5 degrees or lower which is very close to the 28 degree angle of the sun on December 21, the day on which the sun is at the lowest point. It will allow sunlight into the house through part of the window at up to 56.3 degrees of sun angle which would be during all daylight hours from around September 10 - April 1.  During July, there will be no direct sunlight getting into the house from 9:50am until 2:30pm. In this way, the overhang will keep the house cool in the summer and warm in the winter. 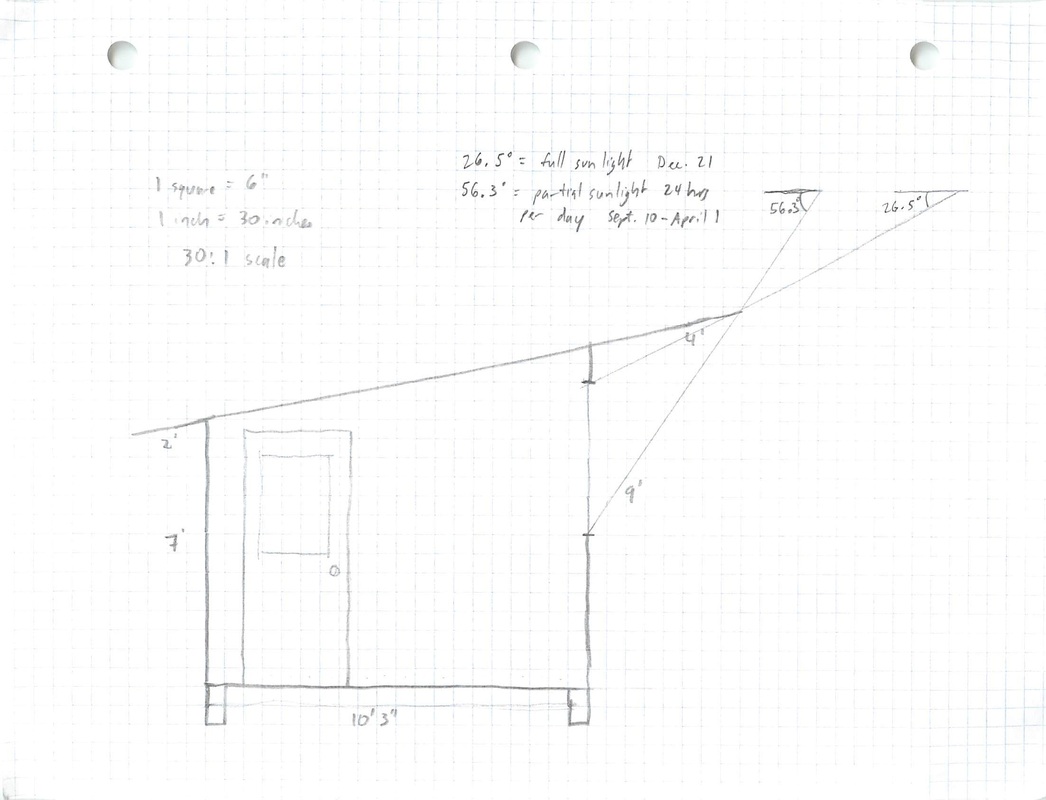 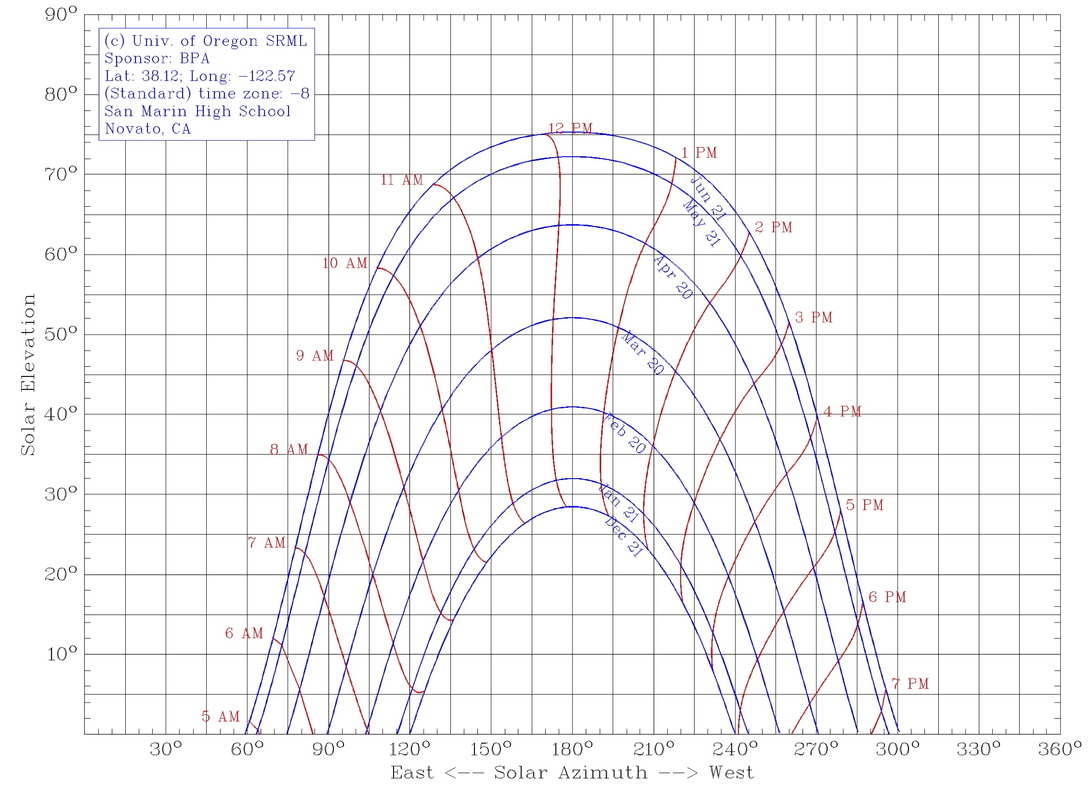 We want to trap as much heat as possible in the winter and keep as much heat out as possible during the summer, so we're insulating all of the walls, ceiling, and floor with 4 inches of insulation batting to give it an R-value of 13. We're also using double paned windows and doors so that there are no places for the heat to leak in or out. 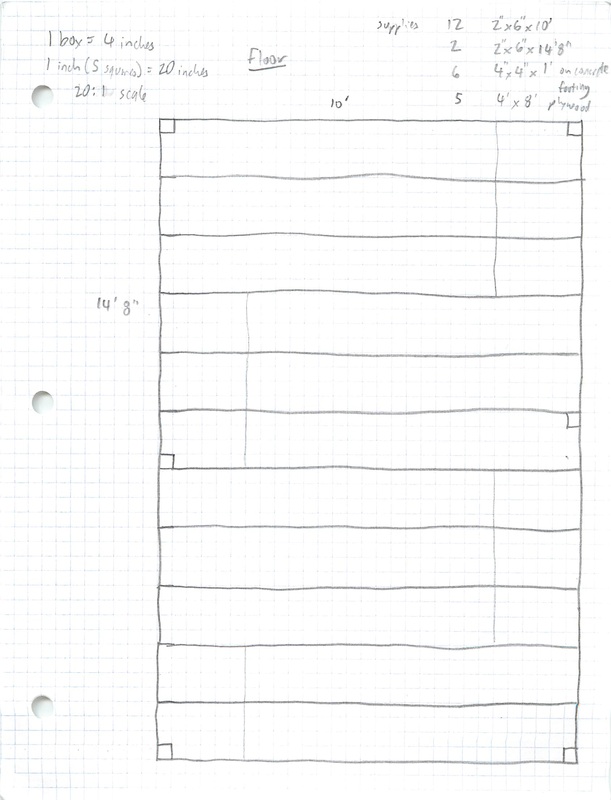 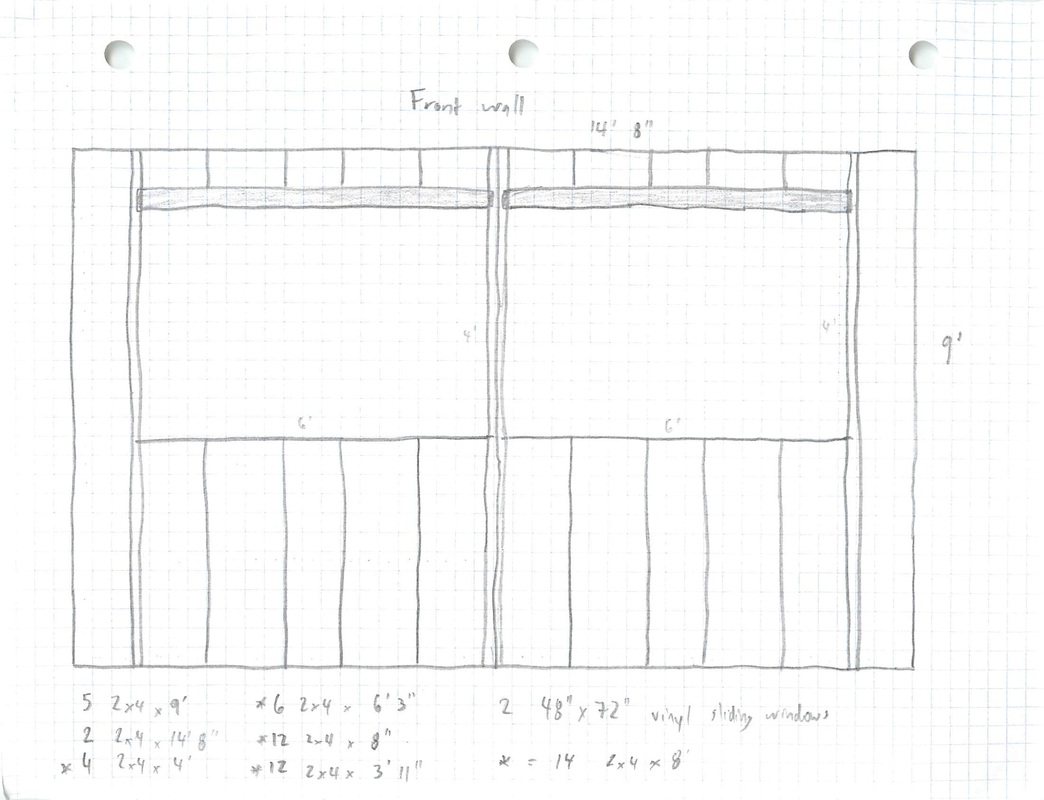 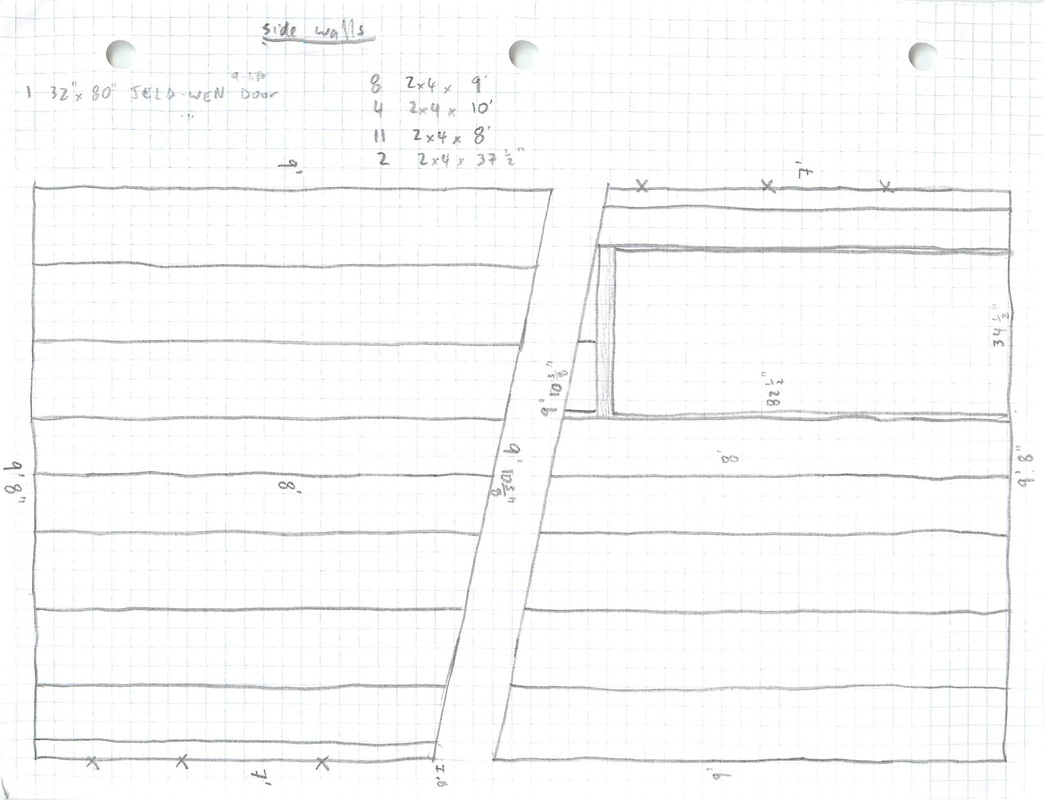 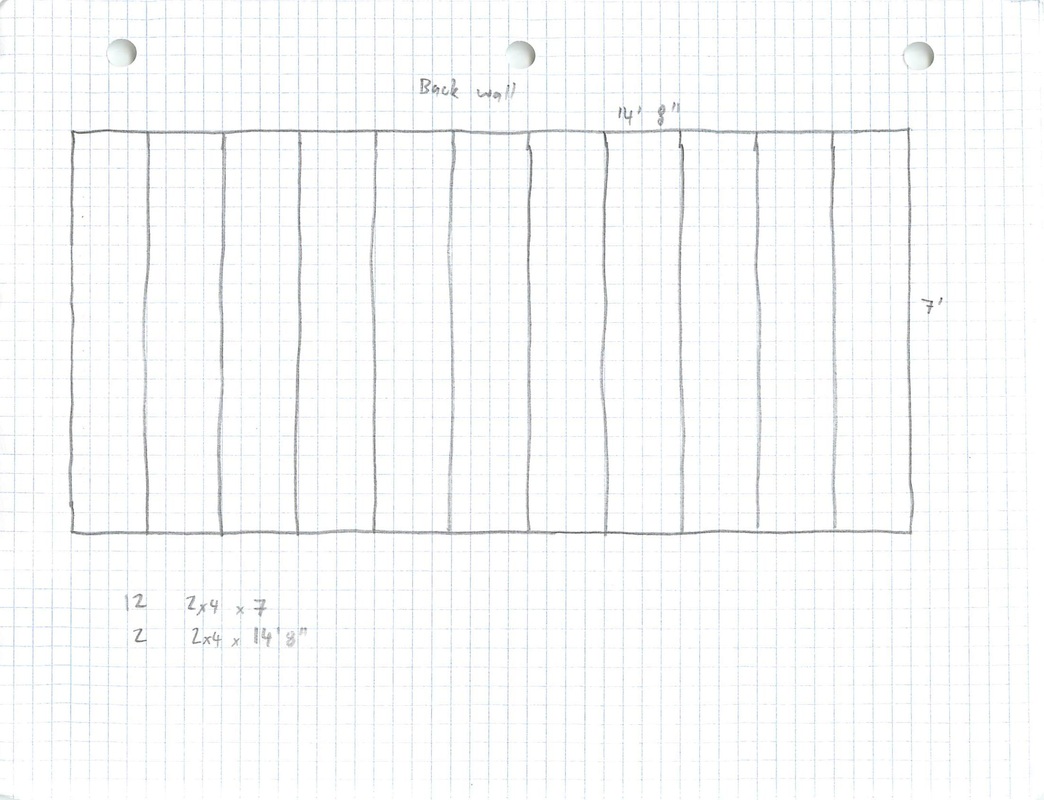 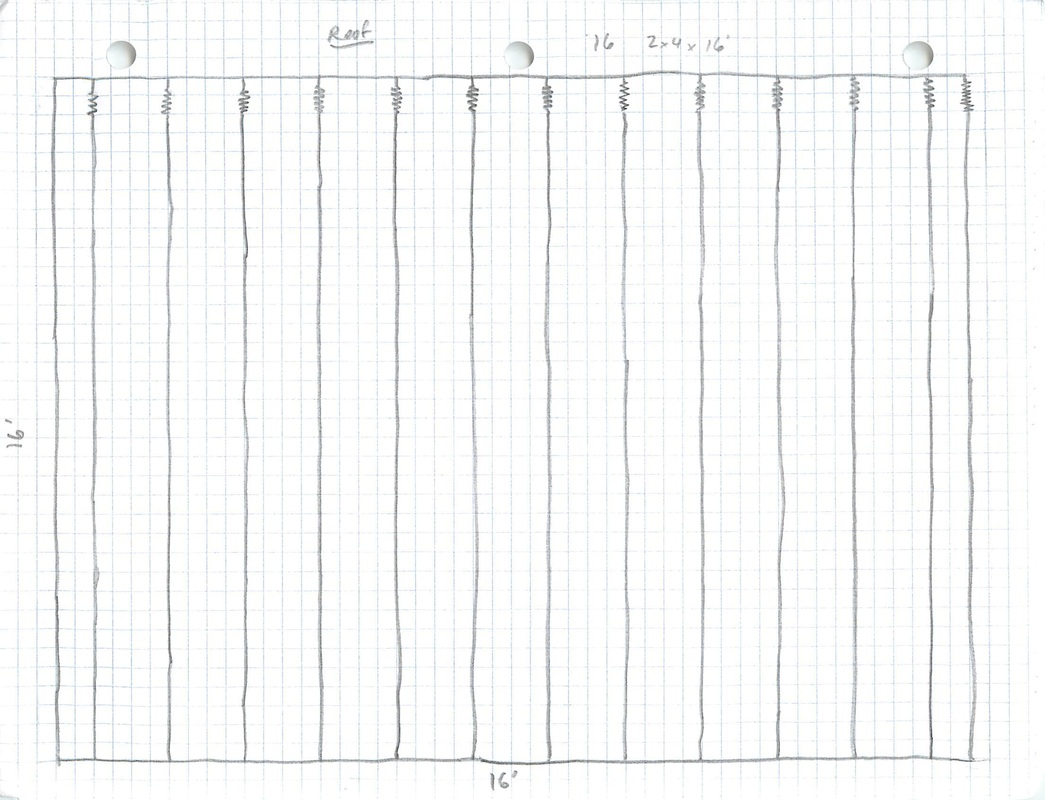 We're planning on using the following: